Why is Body Language Important in Communication?

How often do you think about your body language? Even though it’s not something we remember to think about, it can tell another person how we’re feeling.

If you’ve ever played poker, you know that understanding body language can help you to spot someone trying to bluff their way to victory.

The same skills can help improve your communication at work. 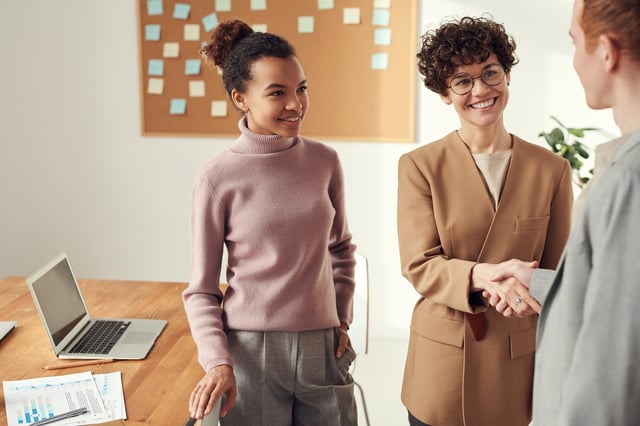 Why Body Language is Important

No matter how engaging or interesting a speech is, if the speaker’s giving off negative body language signals then the audience is less likely to listen to what they’re saying. Similarly, if you’re having a conversation with someone and your body language is disengaged, then it might appear as though you’re disinterested in what they have to say - even though you’re listening.

Here are some of the most common types of body language to look out for:

Body language isn’t an exact science and someone who’s feeling bored or engaged might not show all of the traits listed above. However, when speaking to someone, keep an eye on their stance, gestures and how much eye contact they give to gain a better understanding of how they perceive you.

Got a presentation coming up? Learn about the importance of body language when presenting, along with good and bad examples here.

Some Examples of Body Language Types

Watch the below clip from The Graham Norton Show. Instead of listening to them talk about llamas, pay attention to their body language. How are they sitting? What gestures do they make when talking?

Notice how relaxed the guests are? Even though they’re in front of cameras and an audience, they might as well be chatting in a small room by themselves. They’re laid back, at ease and very comfortable.

As Robert Downey Jr begins to speak, he opens up his body to include everyone. If he were to just face the host, he’d have his back to some people who would feel excluded. Graham interacts with the screen behind him but turns when speaking to the guests so they can see his face.

Everyone is given their chance to speak and no one person ever dominates the conversation. It’s a great example of relaxed and open body language, even in front of an audience.

Time for another clip now. Same rules, keep an eye on the body language.

So obviously, football manager Pep Guardiola isn’t very happy with a journalist’s question here. What’s interesting is he never raises his voice or uses overly negative language. It’s his gestures and movements that really outline how seething he is.

Did you notice how little he blinks as he talks? Go back and have another look. He keeps very strong eye contact with the person he’s berating in a kind of showdown sort of way. But that eye contact breaks when he finishes speaking as if he’s disgusted with what he’s seeing.

He seems to be grinding his teeth and almost recoils at the question he’s been asked.

So the title is a bit of a giveaway. This person is very nervous before they’re about to perform for an audition. Before she’s told the judges that she’s afraid, it’s easy to spot how she’s feeling.

As she walks on stage, her arms are tight to her side and she’s holding her hands. Her shoulders are hunched and she’s almost shrinking into the background. She fidgets as she answers questions and keeps taking deep breaths to try and calm her nerves.

Her voice is quiet and she’s clearly unsure of herself. The crowd can feel her nerves and that has even more of an effect on her.

Then she starts to sing and she’s fantastic. Her body language was warping the audience’s opinion of her before she’d even really got started. This shows just how powerful body language can be. It can shape opinions about us no matter what we say.

Take a look at the handy graphic below to understand other different body language types and what they mean. Feel free to share with your network or colleagues - but don't forget to tag us on Twitter at @UModernGov. 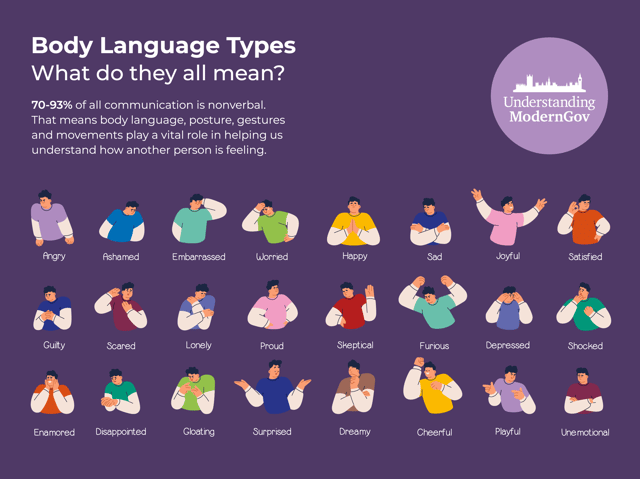 Body Language in the Workplace

Just because you’re not singing on stage or a football manager answering questions, it doesn’t mean the same body language principles don’t apply to you in the workplace. If you stare at someone and subconsciously grind your teeth then others are going to notice and be defensive.

On the other hand, if you’re relaxed and engaged like the guests on the Graham Norton Show, then you’ll find it easier to have conversations with colleagues and team members. Try to be aware of the impact that your body language is having during different interactions throughout the day. It might even be worth asking for feedback from those you’ve spoken to.

Mastering body language isn’t something that can be done overnight - it takes time to naturally be open, confident and engaged. But work at it and you’ll find yourself doing a little bit better at poker next time you play.

Body language is just a small part of becoming a fantastic communicator. If you’re trying to improve your communication skills or you’d like to be a more engaging public speaker, then download our helpful guide today.

It’s packed with tips and ideas that you can use to improve your daily interactions at work.

Inclusive Communication Q&A: Why it’s Important, Who Needs it and How to Remove Barriers